How The New Silk Road is Flattening the World

"Knowledge and innovation are key factors in economic growth and poverty reduction." - The World Bank

The growth and development of China's economy over the last forty years has been unprecedented. The opening and reform of the nation began with western powers, such as the United States, reaching out in hopes the struggling Asian country would be a good client for its brand. The game has flipped.  America is nowhere close to the sort of superpower it was when President Richard Nixon met with Chairman Mao and China is the undisputed global manufacturing leader, making nearly a quarter of the world's goods.

With such output comes integration, to ensure Chinese goods can reach every corner of the world, including traditionally underserved regions. The most audacious act of Chinese infrastructure is certainly the reconvening of China's ancient Silk Road which, in today's context, is a series of freight and transit lines binding China with the former Soviet Union, Europe and the Middle East.

Drivers on a block train in China's less developed interior

The Silk Road takes its name from an economic infrastructure established two millennia ago. The creation of it precipitated an era in which Asian and Middle Eastern empires, from the spread of Islam to the Mongol empire, ruled the world. The recreation of the Silk Road may represent a new pivot toward the East after centuries of Western dominance.

The most diversified element of the initiative is arguably the Zhengzhou-Hamburg rail line, crossing from the heart of China all the way into the lungs of Europe, with a detour through the outer regions of the former Soviet Union. 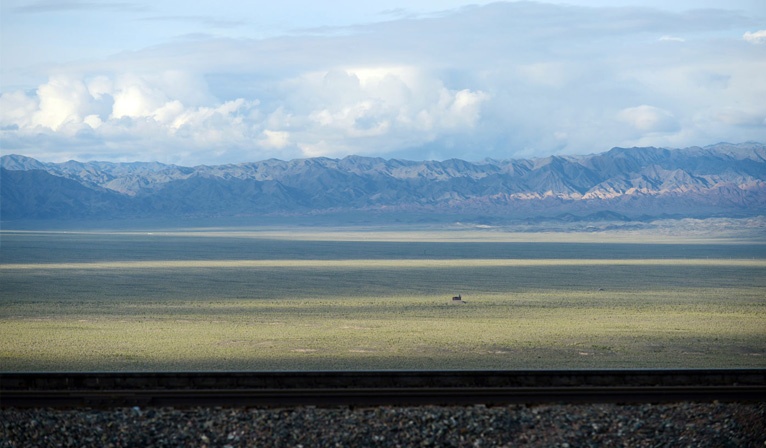 The block trains from Zhengzhou pass through the steppes of Kazakhstan

These underserved regions include the former Soviet republics, many of which – due to their role in the outskirts of the Soviet empire – are very new to the game of global capitalism. One prominent country that could benefit from this is Kazakhstan, the country whose perceived backwardness was famously mocked by Sacha Baron Cohen in his hit film Borat.

The Zhengzhou-Hamburg rail line crosses into the former capital of Almaty, an urban center of almost 2 million people. I can attest from experience how valued the goods this new Silk Road will be to many of those. A friend of mine from the Ukraine (also a post-Soviet state) was sure to make the most of a Chinese-made computer he acquired when he arrived in the United States. This equipment allowed Sergei access to his Russian based bank from Portland, Oregon and to buy specialized products such as survival food for his extensive bike trips through the United States.

Laptop ownership is almost ubiquitous in the United States but far from it in many parts of the world.

The website of The World Bank, an organization dedicated to relieving poverty in developing countries, is a huge repository of information on such projects as the ambitiously titled One Laptop Per Child and their own work in the development of technology commercialization within the former Soviet republic of Kazakhstan through a program set up with the country's Ministry of Education and Science. The cooperation led to several developmental research projects through Nazarbayev University, including one aimed at creating filtration nanostructures that would help curb bacteria and viruses before they spread.

A recent BON video took me further west along the New Silk Road to a terminal in Hamburg where Samir Turkovic, a young crane operator, talks of his appreciation of Chinese economic integration and the small role he plays helping freight containers on their journey between China to Germany. Speaking of his job, Samir says,

"With the train, I see what China is for this world.”

What that is, of course, is still very much the world's workshop, but with an intriguing new element of the ability for that workshop to drop its goods off at your front door, and perhaps even rebalance the cultural world order.

Laptops and electronics will remain significant for the Zhengzhou region – companies such as Sony and Hewlett Packard, mentioned prior, intend to maintain large levels of their supply on the freight. Hewlett Packard has even been called a pioneer of the route that other companies are following.

Easy access to a supply of cheaply produced laptops would give Kazakhs and others from the former USSR economic leverage traditionally not afforded to them. The "global flattening" from this kind of supply chain disruption will be familiar to readers of Thomas Friedman.

But the benefit of greater integration is not simply afforded to the developing countries surrounding China. Labor costs in China's eastern cities have surged in the last decade, so manufacturers are trying to reduce costs by moving production west to the nation's interior. Trucking products from the new inland factories to coastal ports is costly and slow. In fact, China is so big it is in the process of flattening itself.  That is, the poorer, interior regions are also now benefitting from the New Silk Road in the same way as Kazakhstan.

"China is so big it is flattening itself."

In the midst of China's economic growth comes the threat of enmity and prejudice. I currently live in Berkeley, California. The city enjoys a flood of Chinese students and investors who provide a great deal of energy and new thought in otherwise stale and decaying American social and economic climate. I have overheard Americans speak with disdain at the new-found leverage that Chinese have in Northern California. As China increases in power, size and influence, I expect this to continue.

China's growth and development is a double-edged sword. It's a blessing to countries like Kazakhstan to be able to own computers and equipment usually afforded to a sliver of the world's population. However, China will have enormous, possibly unprecedented leverage due to its economic infrastructure, possibly retarding the economic development and redevelopment of much of the world. There is, for instance, nothing even close to the Silk Road in development or even proposed in North or South America or Africa. Hopefully, as more countries benefit from China's integration effort, they make efforts of their own.

Michael Orion Powell–Deschamps has been writing professionally since he was a teenager. Born in Seattle, Washington, he started at the newspaper for Roosevelt High School, graduated to the local Pacific Publishing Company, the San Francisco Examiner and on to the Heritage Foundation in Washington D.C. Currently most of his time has been dedicated to writing for the political website Dagblog, his own website Radical Second Things, and contributing to Asian themed websites.